Homemade Yoghurt for the love of Cheese 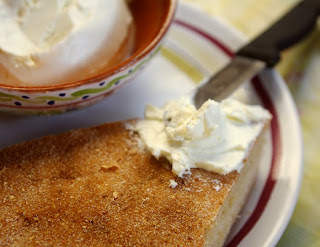 Cheese, as we understand it in America, isn’t so available in most of Morocco. There is the “red ball” cheese (think Gouda), and Laughing Cow type cheese. Outside of the bigger cities, that’s about it. Not only that, but it is relatively expensive. Enough so that I hesitate buying it with my meager Peace Corps allowance.

You, too, can make cheese (if you aren’t already!) and without too much trouble. Let’s start with something fairly easy. Yoghurt. Then, even easier, yoghurt cheese made from that yoghurt. Note that you can use a bit of the yoghurt you made to make another batch of yoghurt--just add more milk!

Neighbor’s review of yoghurt cheese: Hadi Hsn mn lli kaybi3u f ay-blasa hna! (Translation: This is better than anything they sell around here!). They proved their point by scraping out every last bit from the container.

Serialize your glass jars in boiling water for 5 minutes, set aside. Pour the milk into the large pot and scald the milk at 185-195 F (85-90 C). . Place pot in a pan of cold water and cool the milk to 122-130 F (50-55 C), remove from bath. If you do not have a thermometor, test the milk by sticking your pinky finger into it and counting to ten. If you have to remove your pinky before you reach ten, it is too hot. Mix one cup of cooled milk with one cup of yoghurt and cup of dry milk. Add yoghurt-milk slurry to 122 F (50 C) milk, stirring slowly until well combined. Distrubute the inoculated milk to sterilized jars, cover immediately.

Now to keep your jars warm, as the yoghurt bacteria love to get busy when it's warm! There are two main approaches to this.

The quick(er) way: If you want your yoghurt done within 3 hours, you will need to constantly maintain the 122-130 F (50-55 C) temperature. You do not want the temerature to rise too much above 130 F (55 C), as the bacteria working for you will die. One way to maintain temperature is with a water bath, preferably in a cooler, but it is also possible in a plugged sink, or a tub or anything else that will hold water and the jars. A cooler will help you maintain the optimum temperature for longer. In any case, you need to test the temperature of the water either with the thermometor or with the pinky method. Add warm water as nessisary. The yoghurt is done when it has gelled. Look for gelling after 3 hours, if the yoghurt is still pretty watery, allow for further incubating.

The easy way: If you don't mind waiting, and want less active time with the yoghurt, there are other ways to keep your jars warm. You can use a cooler again, but this time fill it with warm water and leave it over night, or for a period of time during the day. I don't have a cooler, and instead use a hot water bottle snuggled up with the jars under a blanket. If I tuck them in at night I have nice yoghurt waiting for me in the morning.

What to do with your yoghurt? Mix in fresh fruit, jam, and/or granola and have a great snack/breakfast. You can use it in sauces and baked goods too. Even better, why not try making yoghurt cheese? 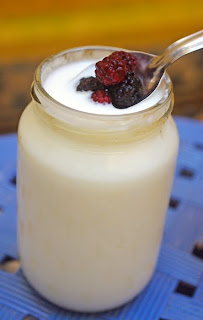 “Cheese cloth” (in Morocco the best fabric for this is called “toob l Hayati”, in America I would imagine something along the lines of a clean handkerchief.)

Sterilize your clean cheese cloth in boiling water for 5 minutes.

Stir up yoghurt to a smooth consistency in a large bowl. Add one teaspoon of salt, and mix thoroughly. Pour salted yoghurt into the sterile cloth in a strainer. Tie the corners of the cloth together, and suspend over a container or sink for up to 24 hours, or until desired consistency is obtained. Remove drained yoghurt from the cloth, store cheese in refrigerator.

Serve your cheese in a middle-eastern style with olives, olive oil or pulverized mint. Or just spread it right onto fresh bread.

Trouble-shooting yoghurt cheese: Sometimes I’ve found the yoghurt to be too thin, all of it wants to slip out of the cloth (make sure you aren’t using a cloth with a loose weave). I have a feeling this comes from the yoghurt being under-cooked (If you have another answer, please share it!). Try keeping your yoghurt warmer next time (but under 130 F/55 C), or cooking it longer. If the yoghurt is too thin for cheese I just eat it as yoghurt instead. 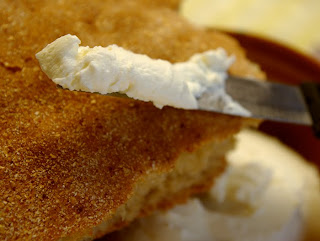 This blog is a record of my experiments of making things from scratch both from my kitchen and studio.

Lisa
I am currently serving in Peace Corps, Morocco, as a small business developer working with artisans since September 2008. I have a Master of Fine Art, in studio art from Washington University in St. Louis.